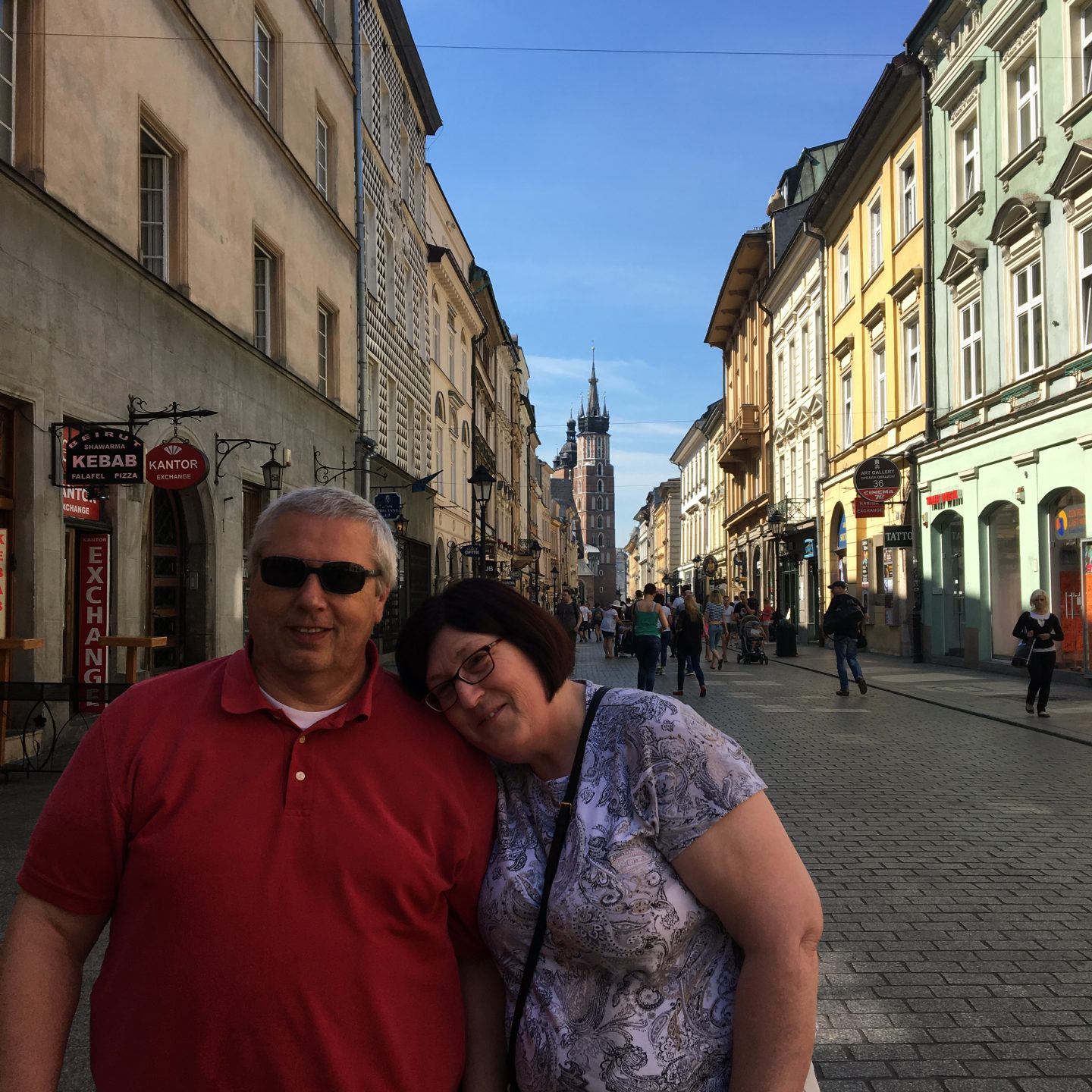 Have you ever noticed how parents can go from the most wonderful people in the world to totally embarrassing in three seconds? -Rick Riordan

This quote pretty much sums up my entire trip with my parents. I love them to death and I enjoyed my trip whole heartedly but when I saw this quote, I just had to choose it! Don’t worry! I won’t tell any of the stories where they embarrassed me!

It seemed like the day of my parents’ arrival would never come. Finally, it did come and I got to show my parents the beautiful city I now call home. After reflecting on the trip, both said they enjoyed their time in Krakow the most. Here is what we did and saw on this trip!

While in Kraków you can’t miss out on Wawel! After a walk up the hill, you not only have a gorgeous view of the Vistula River you have all the wonderful parts of Wawel. I’ve already been into the Dragon’s Cave and we didn’t go back into it this time. I do recommend going to the Dragon’s Cave but only after you know all about the legend of the Wawel Dragon.  This time we walked around and checked out the castle. The castle is pretty cool and I recommend going in for a visit if you ever visit Kraków. I haven’t been inside the cathedral yet but I hear that it is phenomenal! 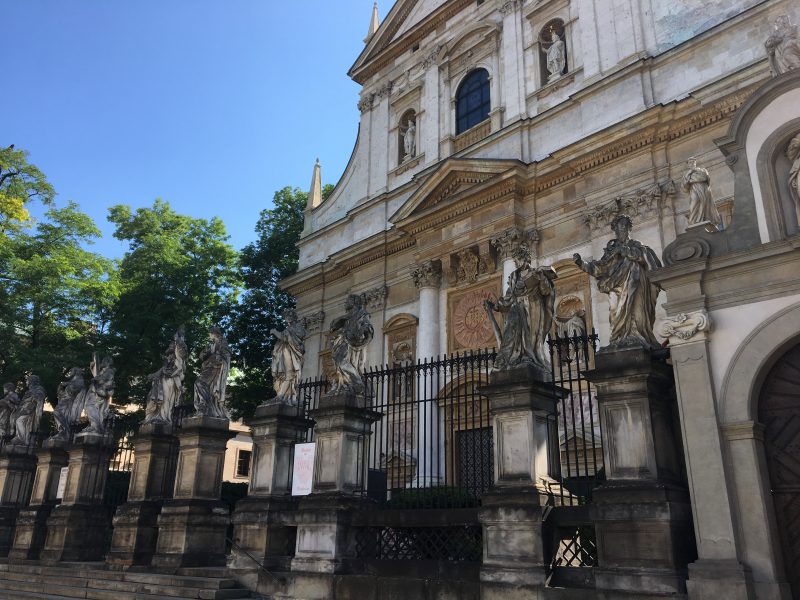 If you’re walking from Wawel to the main square chances are that you will pass St. Andrew’s Church. St. Andrew’s was built between 1079 and 1098 and is one of the oldest buildings in Kraków. It was built in the Romanesque style and is simply gorgeous! There is something classic and magical about the feel of this church with these beautiful statues out front. Basically, I just love churches that are full of grandeur. Recently there have been performers playing violins or harps outside of the church adding to the charm. 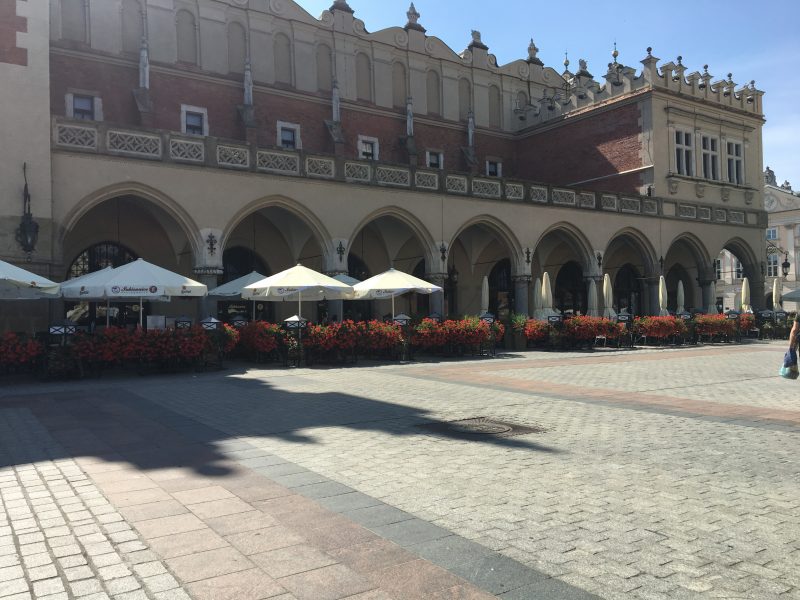 The Main Square of Kraków has a beautiful charm to it. I don’t know if it is the flowers growing all around the square but there is some sort of special charm to it. I love visiting the square and visit quite frequently. During the summer months, it does get a bit touristy but it doesn’t lose its wonderful charm! 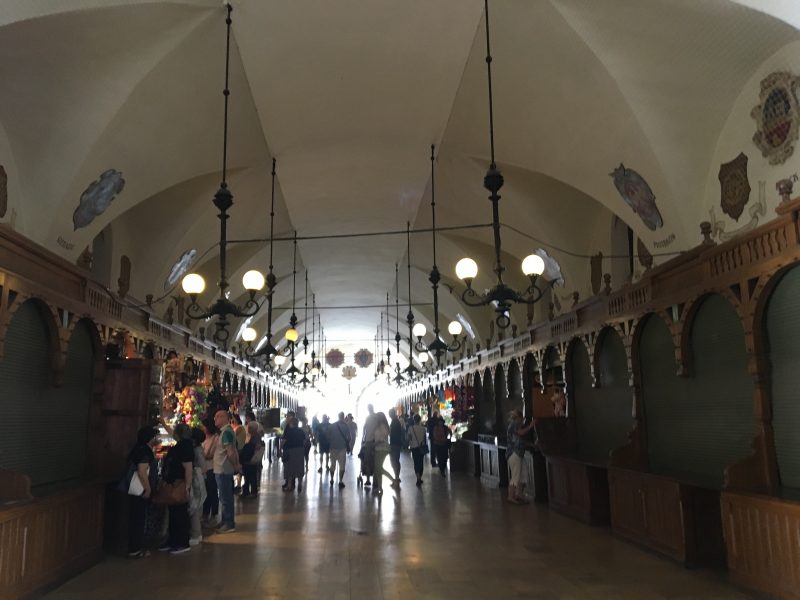 The cloth hall is very cool. It is located right in the middle of the main square and is a must see for all travelers visiting Kraków. Inside you can see vendors selling a wide variety of keepsakes from Poland. You’ll want to make sure you see the knife hanging in the entrance of the cloth hall. The legend of the two brothers who built St. Mary’s Church (keep reading to find out more!) mentions this knife. It is also a relic of Magdeburg Law, a law that punished thieves by cutting off one of their ears. 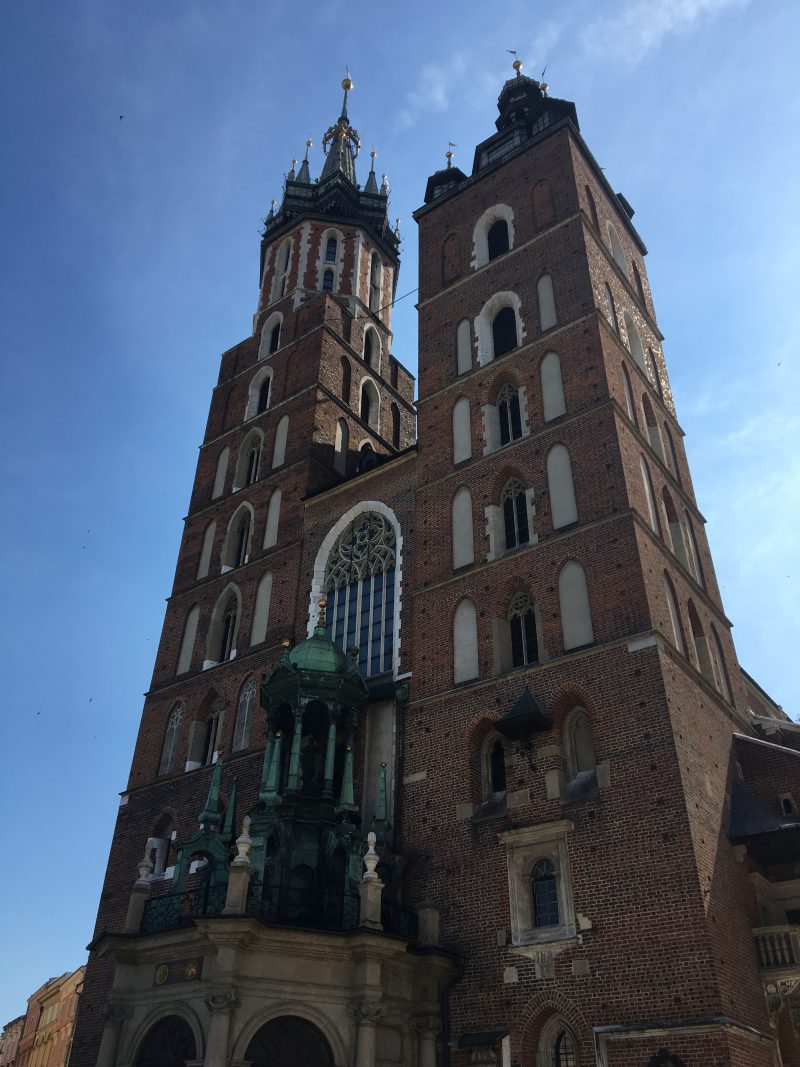 Let’s start with the legend that I left you waiting for. When you see St Mary’s you will notice the two towers at the front of the church. Upon looking closely you will also notice that they are of different heights. While there isn’t an architectural reason to explain the different heights there is a legend, and I love legends! According to legend, two brothers set out to make the two towers at the front of the church. The younger brother realized that his tower was shorter than his brother’s. So, he did what any brother would do and murdered his older brother out of jealousy. But… that didn’t make him feel any better, go figure! So the day the church was to be consecrated he stabbed himself in the heart, using the same knife he used to kill his brother and dropped out of the top of his tower to the ground below! Some say this is the same knife that is hanging in the cloth hall.

If you happen to be in the square on the hour you will have the chance to hear Hejnal Mariacki or Kraków’s Anthem. It is played 4 times every hour on the hour by a trumpeter from the highest tower. I just recently noticed that the trumpeter plays the song in each of the four cardinal directions. The song was originally played to signify the opening and closing of the city gates but today is played to mark the hour. 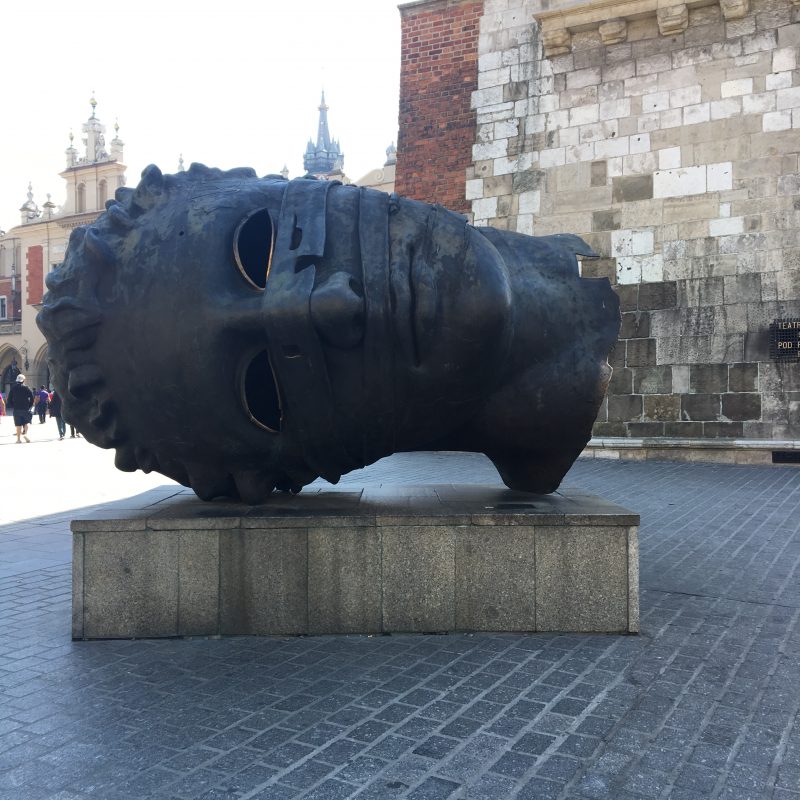 As you’re walking around the square you will notice this head statue. The statue is hollow and tourists and children can often be seen crawling inside and posing in front of this wonderful statue. The statue was originally supposed to appear in front of a mall (one of my favorites Galeria Krakowska) but the artist did not want his work to appear in front of the commercial building. There was much protest from locals and historians about placing it in the square but it now has a home near the Town Hall Tower. 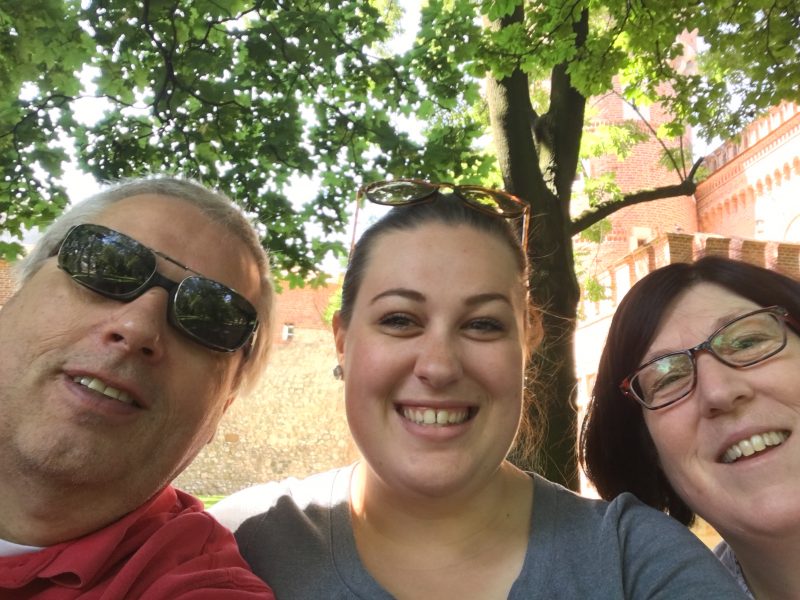 The planty is a large park in Poland that circles the Old Town. Long ago the city walls used to take up this space. It is one of my favorite places for a calm stroll through Kraków. It is shaded which is a nice relief from the beams of sunlight on a hot summer’s day. While in the planty you can see all sorts of locals and travelers alike out enjoying the nice day. My parents and I sat down on a bench and had a wonderful conversation while resting our feet after a long day of walking. This picture was taken by my dad- his very first selfie ever! I would say he did quite well and I hope he never stops taking selfies now!